Varda by Agnès, a masterclass on filmmaking and humanism

Agnès Varda, a masterclass on filmmaking and humanism

In a extremely packed conference room at Berlinale Palast, Agnes Varda enlightened us with her insight after the world premiere of Varda’s documentary ‘Varda par Agnès’, screened out of competition in the section Competition and receiving  the Berlinale Camera, the tribute to personalities and institutions that have made a unique contribution to film and to whom the festival feels especially close. The laudatory speech by Christoph Terhechte could not be more concise and poignant: "for a majestic artistic ouvre, for a uplifting humanism and undefeatable inspiration, I have the deepest respect and gratitude, merci infinitement, Agnès"

"To be honest, my films never made money or gave money to my producers, with the exception of Sans toit ni loi (Vagabond), the only one which did some money. They had small distribution and no money - it's ok, we dont care says the producer, Rosalie Vardà- but my films have found response all over the world. I am proud that in Korea or North of Brazil , there's always a bunch of people that helped me believe it was worth it. "

Varda's most recent visit to Berlinale was in 2004, when she showed her short film Le lion Volatil at Berlinale Special, after being selected four times at Competition. In 1965 she was awarded the Grand Jury Prize for Le Bonheur.

In this ocasion, the audience is completely devoted to Varda, after her on-screen masterclass, a catalogue well-argued of her work since La Pointe Courte, in 1954 until Visages, Villages (2018). Two hours revising her complete works, avoiding the chronological order as the unconventional artist she is. Her motivation to face each work lies underneath any technical approach. The so called godmother of the Nouvelle Vague- no secret that she's rather the founder of the new wave- is first shown presenting a series of lectures in which she discusses inspiration and execution to filmmakers. Varda's avant-garde point of view is unveiled when it comes to her embracing the digital cameras which helped her complete her recent documentaries and her re-invention by the use of three screens. Her passion and strength is mesmerising for someone her age. 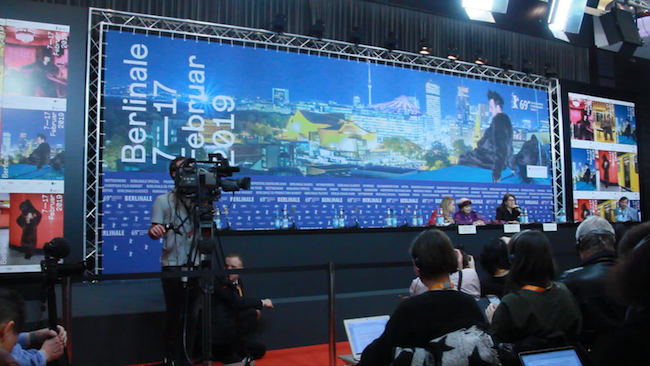 "Everybody has to find its own identity and follow it"

A myriad of stars, including Deneuve, Delon, De Niro, Belmondo, Birkin Sandrine Bonnaire, speak to the audience. The memory of Jacques Demy flies over the auditorium. In the second part of the film, Varda dips into the use of digital technology to deliver her most personal look at the world and revises her works from The Gleaners to Visages, Villages. Either talking to the audience or letting her images address to us, Agnès Varda excels in the storytelling and finding the deepest connection between two human beings while embarking the audience in a journey through beaches, fields, faces and villages.

"Be courageous, be patient be curious. Be joyful about it, it's beautiful to be a filmmaker"

All pics and video by Alexia Muiños

Women in film gathered around...