The first year of Mariette Rissenbeek as the Executive Director of the Berlinale witnessed a growing interest in Green Shooting, new editorial line in the main competition with 30% of women-directed films and again, lots of activities regarding inclusiveness and gender equality from the Women's associations including EWA Network organising its annual members meeting in the rooms of Collegium Hungaricum, its long-time Berlin partner.

EWA Network's director Alessia Sonaglioni, greeted the audience  who  saved their precious time to sit for the conversation with the editors, participate in the working round tables and mingle and network with their peers. After having a quick recap about EWA's activities throughout the year, the participants of the Scriptwriters Residency, Oonagh Kearney and Celia Rico took the stage.

Oonagh Kearney shared some images of her sophomore project Snow in Beara, which received development support by Screen Ireland and made the audience smile by sharing her experience of living with another writer while both of them were dealing with the subject of women compelled to share an indoor space.

Celia Rico explained the details of her second feature project, The Little Loves, around the topic of mother-daughter relationship, as her celebrated debut film, Journey to a mother's room.  The film will be produced by Arcadia Motion Pictures (Spain), and the French co-producer Jérôme Vidal, from Noodles Production 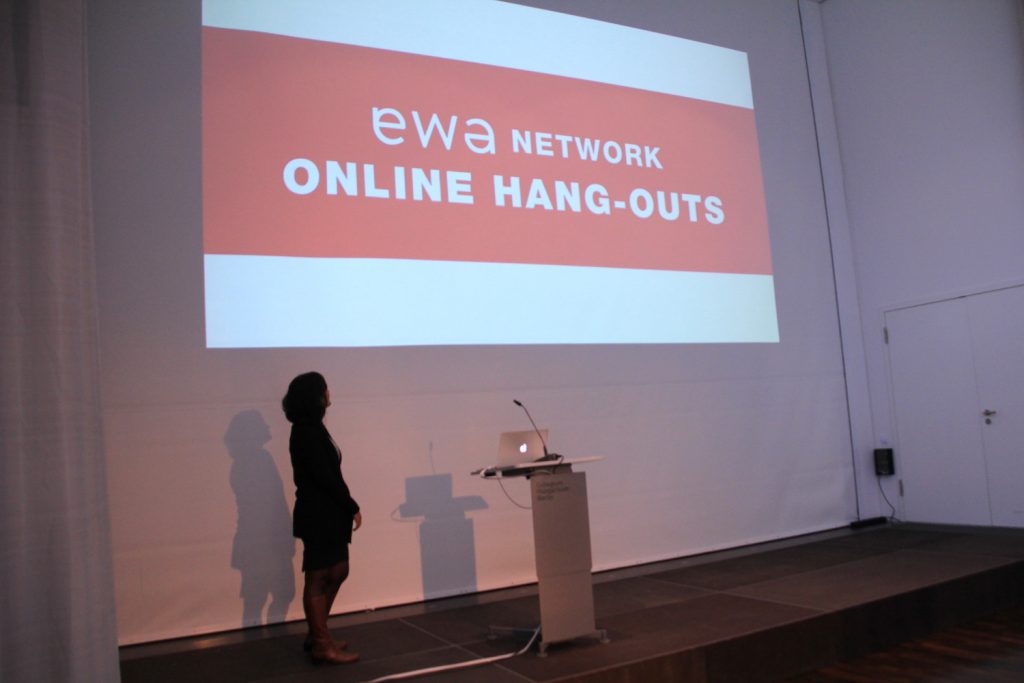 After the welcome speech and introduction, the group split in five rooms to join their respective round tables, focusing in different subjects such as:

From the Idea to the Film Project

Romanian producer and EWA's president Ada Solomon talked to the group about the ins and outs of development, how to sustain it and how to put your project in the spotlight from the development stage.

Networking in Festivals and Markets

An experienced cultural project manager and currently events & award manager of DOX BOX, Marion Schmidt helped the audience to maximise their stay in festivals and plan their calendar.

Stand up for your rights!

Cécile Despringre, director of SAA  addressed the subject of collective management organisations for screenwriters and directors in Europe and revealed how to make the most of your rights to receive royalties for the exploitation of your works

Mobility and Migration in the European Film Industry

Slovenian-German film director, multimedia artist and writer, Hanna Slak shared with the group her experience and insight about mobility and migration in the European Film industry.

With great pleasure and advice from Collegium Hungaricum (thanks Virág Bottlik), EWA Network invited three editors who have cut more than a hundred film among them.

In a conversation moderated by Tamara Tatishvili, editors Fabini, Dringenberg and Lemhényi inspired the audience with their remarks about conciliation family and work, fighting character stereotypes and changes in the film industry.

NEROPA, a tool against unequal gender distribution of film characters

German actress Belinde Ruth Stieve, took the stage to explain the innovative tool to counterbalance the unequal gender distribution of film characters in the audiovisual industry she has developed.

Belinde started researching the situation of women behind and in front of the camera five years ago.

NEROPA sets in when the production is well underway but before the casting process starts. The script is checked for neutral roles, i.e. characters – small or leading! - whose gender is not essential to the story. These roles are then marked as NEUTRAL and redefined as woman – man – woman – man alternately.

In this year's cocktail, the Italian collective Mujeres del Cine was  presented as the guests of honour.

Get Networked event: discussions on what it is to be a woman in the film…

Cinema Total event in the...

Series of events for film professionals at the Collegium Hungaricum Berlin (.CHB) during the Berlinale.