This will be an unusual Festival de Cannes in which EWA Network will co-host an event alongside Marché du Film; we will support our partners in the launch of  the Anti-Racism Taskforce for European Film, ARTEF and  we'll be proud of the success of EWA members in the different sections and above all, with the chance to see most of you in person, after such a long time.

PANEL: From hidden talent to global sensation: How to support rising talent on an international scale

This panel will debate the most effective ways to boost and empower up-and-coming talent in the competitive international arena. This debate will look at what works and what doesn’t when it comes to spotlighting emerging talent from all over the world and search for solutions to bring lesser known talent from territories not previously on the global radar into the spotlight. In this time of colossal global change and specific challenges faced by the audiovisual sector, panelists will discuss already existing talent support tools and question their efficiency in this ever-evolving environment. Panelists will share their personal experiences and discuss new ways of working that may be introduced on the project development level.

WHO: Moderated by Tamara Tatishvili. Meet the panelists of our event here

The task-force will be officially presented on-site on July 9th.

Libertad is the debut film by the Spanish writer/director Clara Roquet, whose previous scripts resulted in multiawarded films such as 10.000Km or Petra (Director's Fortnight). The film is produced by AVALON and co-produced by EWA member Katleen Goosens, with her company Bulletproof Cupid.

European Film Promotion, the international network of promotion of European talent has revealed the line-up of its celebrated programme Producers on The Move.

Each year, 20 young producers from 20 different countries from throughout Europe are selected to participate in PRODUCERS ON THE MOVE at the Cannes Film Festival but this year, due to current circumstances, it will be held online from 17–21 May.

60% of the selected participants are female producers and we are proud to see four EWA members and two former mentees among them. 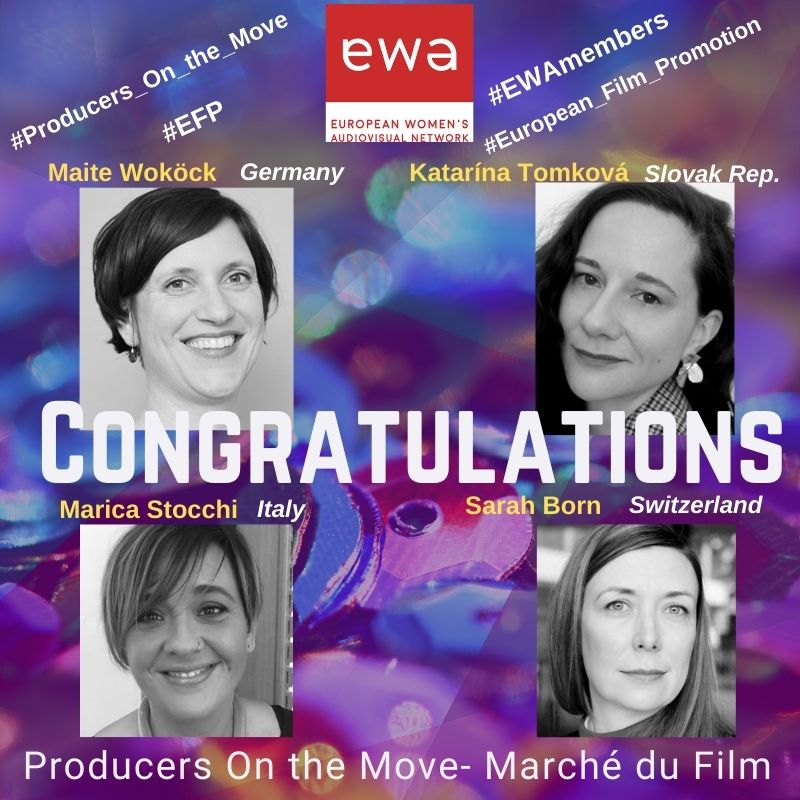 The Cinefondation’s Atelier was created in 2005 to stimulate creative filmmaking and encourage the emergence of a new generation of filmmakers. So far, out of 246 projects accompanied, 172 have been released in the theaters and 23 are currently in pre-production. For L’Atelier’s 17th edition, 15 projects from 15 countries have been selected, from the new director to the well-known filmmaker.