A case study and in-depth conversation about "Gender trouble in story development: challenging the creative mind-set and the influence of historically rooted social conceptions" with Teona Strugar Mitevska (God Exists, Her Name is Petrunya).

The talk was moderated by EWA's Strategy Manager Tamara Tatishvili and open up for a discussion with the cutting-edge filmmakers from the Europe! Voices of Women in Film programme. 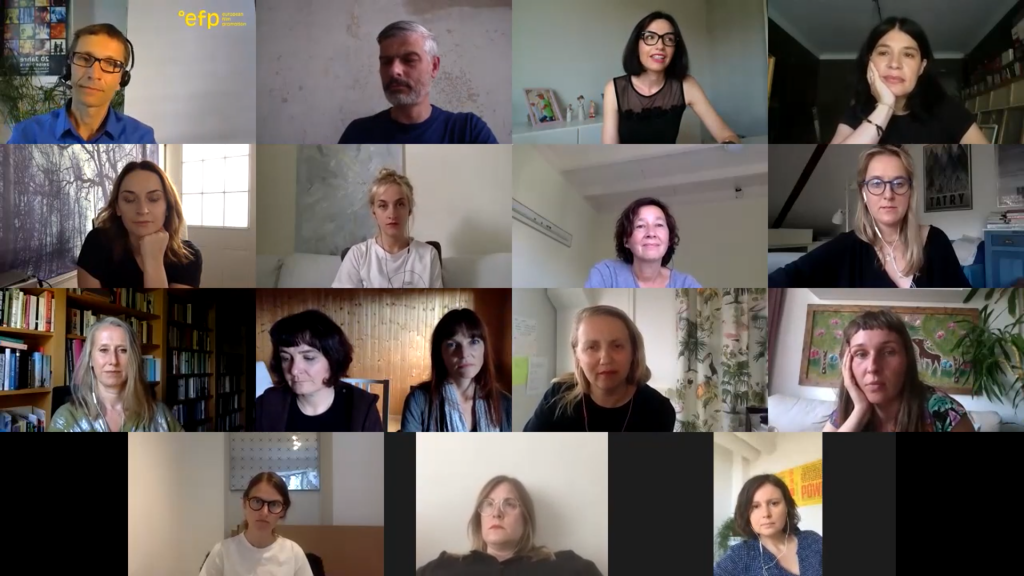 North Macedonian born Teona Strugar Mitevska started as a child actor, trained as a painter and graphic designer and studied film at NYU-Tisch School of Arts. She directed her first short, VETA, in 2001, and has been making films ever since: How I Killed a Saint, 2004; I Am From Titov Veles, 2007; The Woman Who Brushed Off Her Tears, 2012; Teresa and I, 2013; When the Day had No Name, 2017 and most recently, God Exists, Her Name is Petrunya that premiered in competition in Berlin Film Festival 2019, where it was awarded the Ecumenical Prize. The film has received more than 30 awards internationally, most notably the 2019 LUX Prize by the European Parliament and was sold for theatrical release to over 40 territories world-wide. In 2018, France's Ministry of Culture awarded her the Chevalier de l'Ordre des Arts et des Letters. Teona Strugar Mitevska lives between Skopje and Brussels with her son Kaeliok.

EWA TALKS AT  EUROPE! VOICES OF WOMEN IN FILM

We are joining forces with EFP and SFF and deep-dive in two exclusive online panles for the selected female directors in this year's programme. Both events will be published on the EFP, EWA and SFF websites and social channels for a wider Australian and European audience.

EUROPE! VOICES OF WOMEN IN FILM is supported by the Creative Europe - MEDIA Programme of the European Union and Eurimages and presented for the first time in cooperation with European Women's Audiovisual Network (EWA) and Festival Scope. The media partners are Screen International, Fade to Her and Fred Film Radio

Teona Mitevska's film among the...

EWA Network announces a collaboration with EFP in the programme EUROPE! VOICES OF WOMEN IN…