Finnish feature film Aurora, to be screened at BOZAR, Brussels on Nov 19

Organized in partnership with the Finnish Presidency, the screening of the film will be followed by a Q&A session with the director and producer, moderated by the European Women's Audiovisual Network (EWA).

Aurora is a romantic-comedy directed by a young woman, Miia Tervo, an award winning writer and director from Finnish Lapland. The film, released in 2019, opened the Göteborg Film Festival and is the Nordic Council Film Prize nominee from Finland. It will be screened for the first time in Belgium to celebrate the beauty and diversity of European cinema.

The screening (at 8.00 pm) will be preceded by a cocktail organised with a coalition of associations from the creative sector, including the European Coalitions for Cultural Diversity (‘CEDC’), the Society of Audiovisual Authors (‘SAA’), Europa International, the Federation of European Film Directors (‘FERA’), the International Confederation of Arthouse Cinemas (‘CICAE’), the European Producers Club (‘EPC’), Cineuropa -  in partnership with the Lux Film Prize. The film will be followed by a Q&A session with the director and producer, moderated by Tamara Tatishvili ( European Women's Audiovisual Network ). 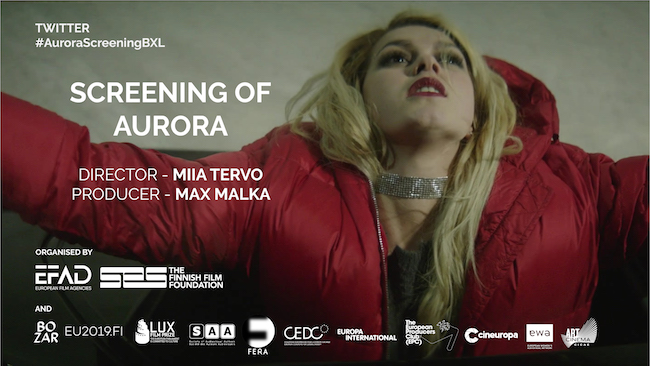